This last Sunday we had my sweet Everett’s fifth birthday party (he has no idea that today is his actual birthday). It was a classic March morning at our home in California; the warm Spring sun shined on our first guests as they walked up the driveway then fat raindrops fell on the guests who arrived three minutes later. 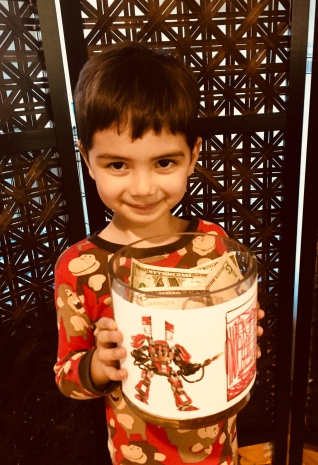 Eight of Everett’s little preschool buddies, their parents, and our close family members joined us for the celebration. As the adults introduced themselves to new friends and embraced some old ones, the kids decorated their Ninjago-themed goodie bags to use later to collect treasures from the Ninjago pinata.

It was an average children’s birthday party except for one substantial difference: as the guests arrived, there was no presenting of boxes wrapped in brightly colored paper, no mountain of presents growing on our entryway table.

Instead, there was a jar. It was a clear, 10-inch cylindrical jar and Scotch-taped to the side of it was a picture of the $60 “Kai Mech” Ninjago LEGO toy that Everett had been saving for since January (right around when the novelty of his Christmas presents had worn off).

When I had sent the Evite for the party, I included a message about Everett’s jar and the toy he was saving for. In lieu of presents, I invited Everett’s friends to make a contribution to his savings jar. And sure enough, they kindly complied.

As our guests arrived to the party, instead of boxes the size of the birthday boy himself, each child handed my son an understated but personally decorated envelope or handmade card. In addition to the creative drawings and words of love the children had handwritten, there were a few dollars included inside each.

At the time the party began, the jar contained exactly $5.48 – money Everett had earned from two months worth of doing five-year-old chores around the house: putting his clean laundry away in his dresser, collecting eggs from the chicken coop and helping Dada take the trash cans to the street on Monday nights. But as he opened each personal card and added the dollars into his jar, he soon had just enough for his toy (with a little extra contribution from Mama and Dada). Using the red marker we’d been keeping in the jar, he colored in the little chart taped next to the picture of the toy. After months of patience, he finally saw that top line reach the “$60” mark.

What started out as a random idea born out of the fact I would go crazy if I saw another unneeded toy piling up in the corners of our house, turned out to be an amazing life lesson for Everett and mindset shift for all of us. This one seemingly insignificant exercise ended up ripe with lessons for him and our other two children by proximity:

The icing on the birthday cake was when I overheard two of the parents saying how nice it was to not have had to run out and grab a present for yet another birthday party, not knowing for sure what the child wanted, already had, or what other party guests might bring him.

I was a bit nervous to try something new and forego a tradition that is so deeply entrenched in our culture. But it turns out it was a win-win for everyone and, as a result, it’s something we will try again in various ways for the next 41 birthdays we have between now and when all three kids reach adulthood. In addition to the potential for life lessons, that should also save us from a few unneeded toys collecting dust in the corners of the house…

Have you tried any creative approaches to present-giving occasions? What do you think of what we tried for Everett? We want to hear your thoughts! Comment below. Subscribe to receive future posts directly in your email. Visit and Like the We Lean OUT Facebook page.

Get the book on Amazon!

My journey of #selfdiscovery continues... 🌅 Second lobes plus a pair of helix #piercings!👂🏽
LEANING OUT has won the 2021 #EricHoffer #bookaward in Self-Help!
Have to share this awesome graphic by @lizandmollie because it perfectly explains why so many of us choose to Lean Out of our careers.
I'm absolutely loving @jayshetty ‘s new book, Think Like a Monk 📚 So many parallels to Leaning Out!
LOVING my new #workingmama mug from the amazing @confessions_of_a_corporate_mom !
Our generation is fortunate to have been told often that we can “be anything we want to be”. 💪